Just back today from Amboli Ghats, one of the wettest places in the monsoon in Maharashtra and a biodiversity hotspot. An hour at Amboli in July and there remains no doubt as to why it is called the Cherrapunji (the place in India that receives the highest rainfall) of the Western Ghats. The mini hill station is at an altitude of 690 metres and receives an average of 275 inches of rain per year.

The rain gods seem to love the place and the landscape is alternately drenched in torrents of rain or engulfed in a thick fog. No wonder then that, Amboli is home to a variety of Herpetofauna that are endemic to the region. A walk at night in the streets of Amboli will prove to be pure moments of eargasm for amphibian lovers. The air is thick with calls of the frogs and toads and other creatures of the night like the tree crickets. The breeding season is on and they know that they must act fast. The vocalizations of the male are at their loudest and the competition to attract a suitable female and start mating is fierce.
The Bombay Bush Frog (Philautus bombayensis) or the Konkan Bush Frog is by far the loudest contestant. It is very aptly nicknamed as the Typewriter frog owing to its call which sounds exactly like someone furiously and frantically typing away at odd hours. Its clever camouflage makes spotting it very difficult despite the loud calls. Here is a link to an amazing video of this tree frog using its vocal sac to sound its call.

As soon as you get close enough, the frog is smart enough to stop the calls and thus remain hidden from potential predators. A picture below shows the beautiful camouflage with its surroundings.

Amboli is famous for the sighting of the Malabar Gliding Frog (Rhacophorus Malabaricus) which is endemic to the Western Ghats. Leaf green in color with bright yellow-orange web on hands and feet and eyes that bulge out, it looks almost like a cuddly toy frog. The frog rests in the trees during the day, well-camouflaged among the leaves and is quite active at night calling loudly from tall leaves. Malabar Gliding Frogs have been known to glide through air from one tree to another covering a distance of over 10 metres. 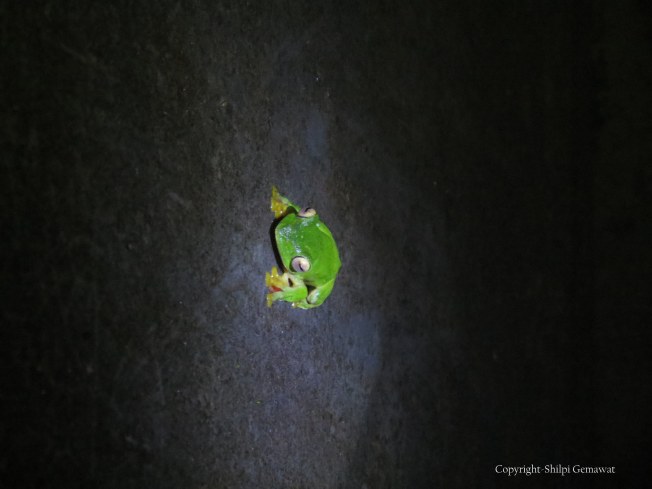 The male Malabar Gliding Frog builds a foam nest that covers the eggs. The nest is usually found on the leaves of the trees that have branches hanging over a water body. The tadpoles emerge from the eggs in the foam nest and directly fall into the water. Here is a picture of the foam nest that we found and also the habitat.

The Malabar Nature Conservation Club at Amboli is engaged in building more habitats like this to help the Malabar Gliding Frog to breed and multiply.
Again, luck seemed to be on our side as we also came across an adorable tadpole of the Malabar Gliding Frog with fully developed fore limbs and hind limbs and a tail. With a yellow body specked dark spots and a brown tail, the creature was resting on the damp edge of a well at night.

The fruitful night trail that went on well after midnight brought us across the Marbled Ramanella Frog (Ramanella marmorata) an endangered species which is endemic to the Western Ghats. This species can be easily recognized by the V-shaped black band on its neck.

And now for the Frog species that I found most exciting, that is the Humayun’s Wrinkled Frog (Nyctibatrachus humayuni). The Wrinkled Frog is so called because of the skin on its back which is highly wrinkled and folded giving it an appearance like orange peel. We not only spotted the Adult frog but also came across a sub-adult of the same species hopping about on the road. 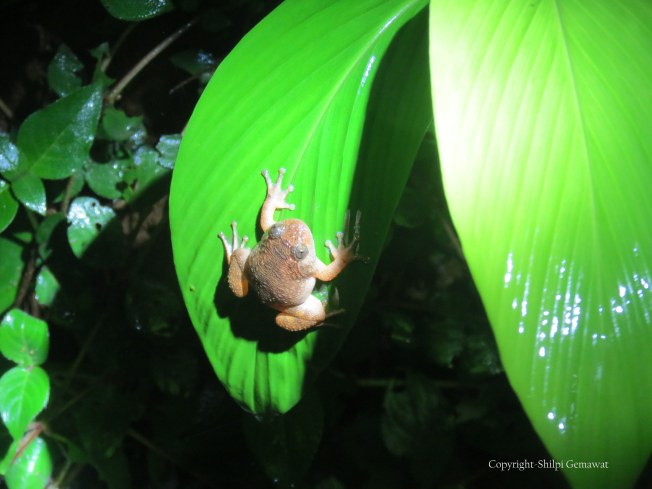 As we neared the nesting place of this frog, the air started reverberating with its calls that sounded like “Wooot Wooot”. In the dark night the calls sound both eerie and a bit funny too. We came across a male that was calling and there on the leaves near to it, we found the eggs, some transparent, others translucent, jelly like and through which we could easily see the tadpoles inside with their tails. Here is the picture of the eggs and also a link to a video of this frog calling.

The Indian Bull Frog (Hoplobatrachus tigerinus) is the largest frog species in India and may grow upto 16 cm in length. This time I got to see both a baby bull frog and also a full grown adult Bull Frog. It is the common frog species in the Western Ghats. 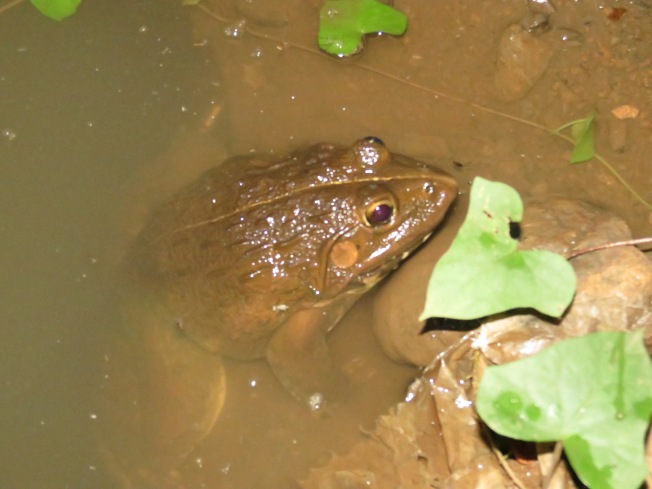 My Posts on other websites